Asparagus season is in full swing in Cornwall, and what better way to enjoy it than with this vegetarian-friendly take on a scotch egg. If you like the sound of it, watch the video and let head chef Joe Simmonds guide you through the method. The average scotch egg is usually wrapped in meat, but an encasing of creamy béchamel sauce is a little-known method that tastes just as (if not more) delicious. We’ve used Cornish Blue cheese which is a great addition to the flavour combinations. This dish could be lunch, a snack, or an impressive starter to any dinner party.

For the scotch egg, you will need:

For the béchamel sauce, put a saucepan on medium heat and melt 50g butter. Once melted, add 50g of the flour and whisk to combine.

Add salt, pepper, and the cheese, and whisk until the mixture forms a smooth, thick sauce.

Remove the pan from the heat, mix in the juice of half a lemon and pour the mixture out into a flat tray.

Place the tray in the fridge for up to an hour or until the mixture has solidified.

Bring a pan of water to a rolling boil and gently place the egg in the water and set a timer for five minutes. Once the time is up, remove the egg from the water and allow it to cool. Once cold enough to handle, gently de-shell the egg and set aside.

Bring another pan of water to the boil for the asparagus.

To prepare the asparagus, bend towards the bottom of the stem until they snap. Discard the woodier bottom ends and set one half of the bunch aside. This will make up the salad.

For the remaining half, peel the outer skin off the stems and place the bunch in the boiling water for three minutes.

After three minutes, take the pan of boiling water off the heat, carefully remove the asparagus with a slotted spoon and place it on kitchen paper to drain.

Heat a frying pan on the hob and sauté the asparagus stems with a dash of oil for a few seconds. Add a generous pinch of salt and a small knob of butter.

Once the butter has completely melted, add the stock or wine to the pan and allow the liquid to simmer until it had reduced by half. Add the remaining butter and stir the pan until the sauce is thick, remove the saucepan from the heat.

After an hour, remove the béchamel mix from the fridge, scrape a handful of the mixture into your hands and roll it around in your palm for a few seconds to make it more malleable. Flatten the mixture into a 1cm thick pancake and gently encase the egg to form a smooth ball.

Place the flour and breadcrumbs in separate, shallow dishes. Whisk the raw egg and place in another shallow dish. Dip and roll the béchamel-covered egg in the flour until coated completely, then in the egg, and then the breadcrumbs.

Heat the oil in a deep heavy-bottomed pan, until a breadcrumb sizzles and turns brown when dropped into it. (CAUTION: hot oil can be dangerous.)

Very carefully place the scotch egg into the hot oil and deep-fry for tree minutes, until the breadcrumbs are golden and crisp.

Whilst the scotch egg is cooking, begin preparing the salad. Peel the remaining asparagus into ribbons and place into a bowl.

Thinly slice the baby radishes and add to the bowl, along with the salad leaves, salt and pepper and a drizzle of oil. Mix everything together and set aside.

Carefully remove the scotch egg from the oil with a slotted spoon and drain on kitchen paper.

Place the asparagus on your serving plate with a few spoonfuls of the buttery sauce and top with a handful of the salad mix.

Gently slice the scotch egg in half, place on top and layer on another small handful of salad.

Last but not least, enjoy! 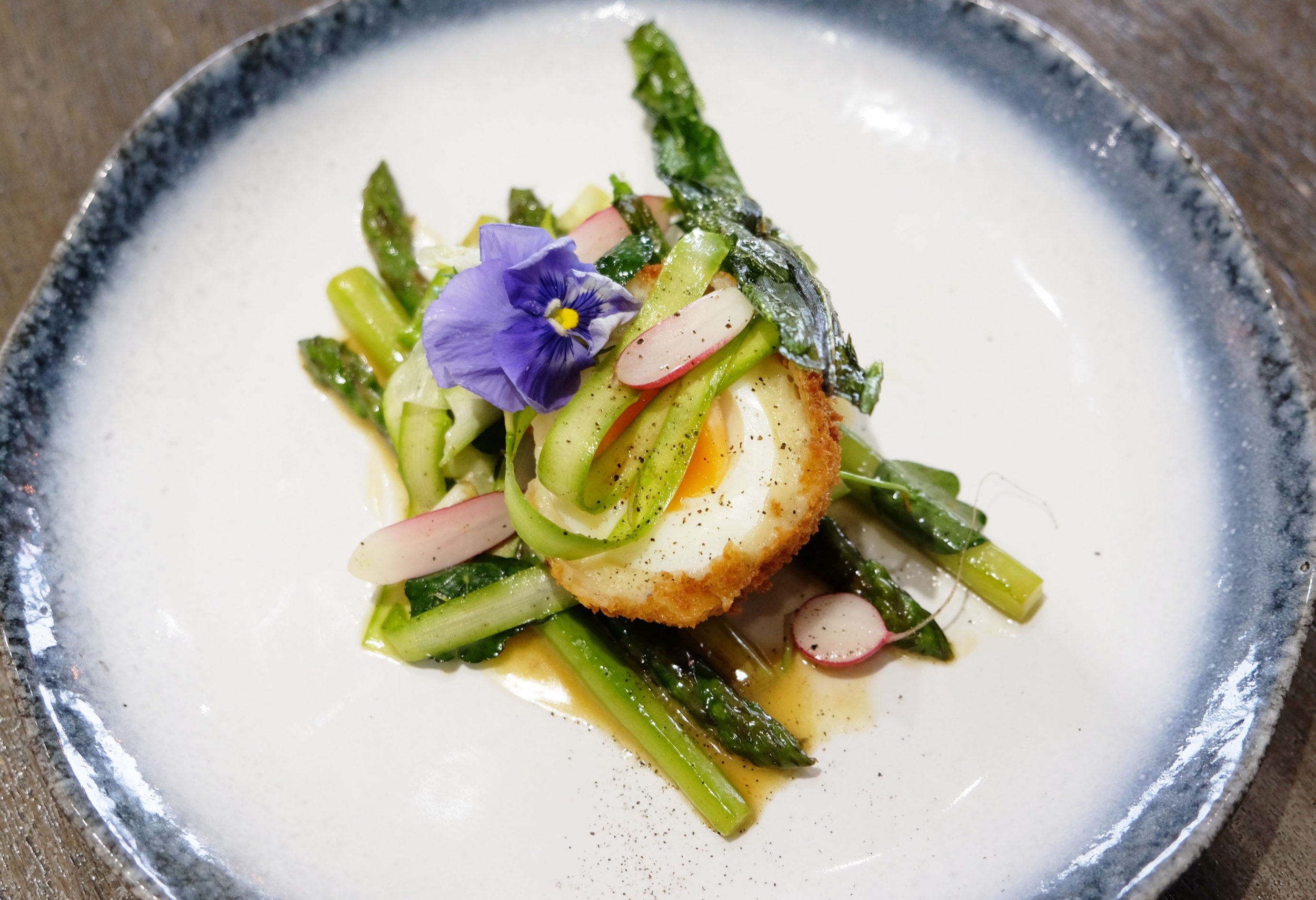