Its subtle, floral flavours are perfect for late summer evenings on The Beach terrace, to be enjoyed whilst watching the sun setting over Summerleaze Beach.

Matty has shared his secret recipe below, so you can now make it yourself at home with friends and family. 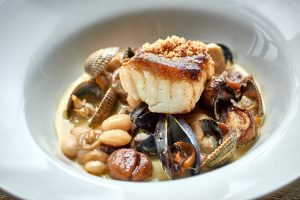 Our head chef Joe Simmonds has very kindly shared his recipe for a delicious and hearty dish that’s guaranteed to impress dinner guests: spiced hake fillet with roast artichokes. This hake recipe serves four people and would make a great meal to enjoy in the colder months of autumn and winter.

200g of clams (or you can substitute for another shellfish)