Posted by Paula Woodward in What to do,

Bude is full of spectacular sandy beaches and famed for water sports. But did you know that Bude also makes a great base for getting out and about to see some of the things that make the area so special? Here are some ideas for day trips around Bude.

Just half an hour south on the rugged north Cornwall coast sits the ancient birthplace of King Arthur at Tintagel. Tintagel Castle, perched high up on the dramatic coastline, has fired imaginations with its links to King Arthur for centuries, and in 2019 was reunited with the mainland for the first time in more than 500 years when the historic crossing from the mainland to the headland was recreated by a new footbridge.

Explore the island, castle, the remains of the medieval buildings and the beach below at one of Britain’s most historic places. Book tickets online in advance for timed crossings of the new bridge. 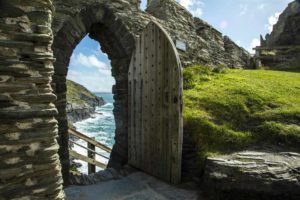 Travel 30 minutes north from Bude and you’ll find another historic village at Clovelly. Once owned by the Queen of England, Clovelly has been in private ownership since Elizabethan times. The picturesque fishing village is a perfectly preserved monument to times past, with traffic-free steep cobbled streets winding down to the ancient harbour – the only transport allowed are sledges and donkeys.

Explore the village, visit the restored Victorian walled kitchen garden, eat in one of the two inns, explore the shops, or take a guided tour. Entrance fees apply to all visitors and include parking, a 20-minute film of the history of the village, entrance to the two museums (Kingsley Museum and Fisherman’s Cottage) and to Clovelly Court Gardens.

Slightly further away, the beautiful Lundy Island makes an unforgettable day trip. The tiny island is just three miles long but packed with history including listed buildings, monuments and depending on the season, thousands of seabirds.

Owned by the National Trust, a further 50 years of ownership was secured in 2019 to protect this amazing location which on its rugged and exposed west coast is home to colonies of Puffins and Manx Shearwaters. The relatively protected east coast meanwhile is famed for its spectacular wildflowers in spring.

Access is by ferry from either Ilfracombe or, nearer to Bude at Bideford – ferries run several times a week. Look out for guided walks, rockpool rambles and snorkelling safaris for seeing the wildlife, or visit the Marisco Tavern, a pub which never shuts (although you can’t get a drink all of that time). You might see dolphins, seals breeding in the sea caves or even basking sharks.

For more information on day trips or other activities nearby please contact our reception on 01288 389800, where one of our friendly team would be delighted to advise.